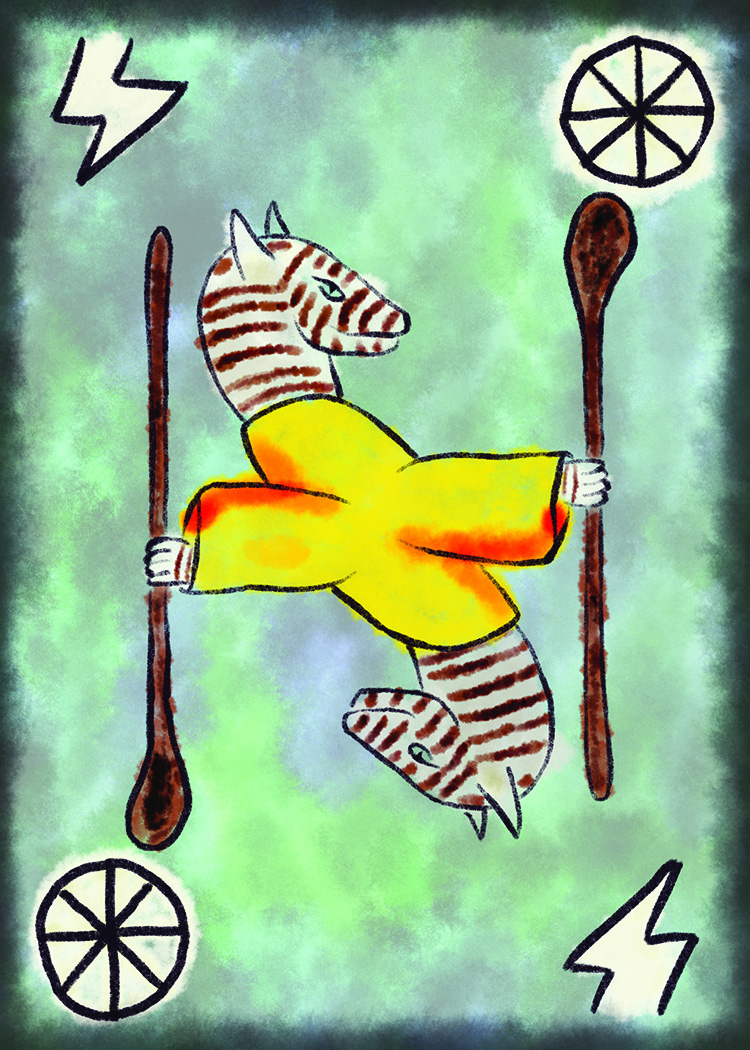 There are a wide variety of card games played throughout the Misty Sea and Partonen. Mirroring the social nature of omyr, most of the games are multiplayer though some are solitaire. Rules for a sampling of games are provided here ranging from the historic getha card game to the popular yamiro and the solitary dotak. The rules are also provided on PDF suitable for printing, trimming and folding for inclusion with a deck of cards.

An information booklet for all card games is available here.

A variety of card styles can be purchased from DriveThruCards

Playing cards have been in use ever since the Arlin omyr learned the art of cartomancy using cards of tattooed and stiffened leather. When the nomads settled around Getha the rules for Ra-e-Gore-o-Getha solidified into their current form.

The players pick up their hands, sort the cards by suit and evaluate the quality. The dealer sets a bring-in bet that each player (including the dealer) must put in the pot in order to remain in the game. The players who remain can discard up to six cards, drawing as many cards as are discarded. All of a player’s discards must happen at once: as soon as a replacement card is drawn no additional cards may be discarded.

A player wins the pot if all other players fold. Otherwise the winner is determined as follows:

Each player who is still in the game plays their cards face up on the table. If an arl is played then any cards of that suit that have been played, or are held in reserve, or in folded hands, or in extra hands (those dealt when there are fewer than four players) join the arl. However, discarded cards remain out of play. If a player loses a suit due to an arl then, if possible, he must play another suit from his reserve cards so that he has two suits in play. If this results in another arl being played then any cards of the same suit that have been played, held in reserve, are in folded hands, or are in extra hands join the arl. Any time a player has less than two suits played he must play another suit from his reserve cards if possible. This continues until all arl cards in play have been resolved.

If a player’s played cards include an arlas then any other player who does not have a deiskatun in their played hand must drop out. If only one player remains they are the winner, otherwise battles ensue. Only the alak and number cards figure in these battles. The hands are ranked by the number of alak in them, with ties in alaks broken by the number of number cards, and ties in number of cards by the total value of the number cards. Battles are then fought in order of the highest ranked to lowest with the loser of a battle dropping out and the winner proceeding to the next lower ranked hand.

Of uncertain origin, this game developed a great popularity among mercenaries during the Warring States period who then spread it throughout the Misty Sea. The goal of yamiro is to defeat an opponent through a war fought through various engagements. It is difficult to win every battle and winning the war is as much about picking which battles to lose, and how to lose them, as it is about winning engagements.

Starting with a shuffled deck each player is dealt four cards. These form the resources available to the player and are constantly replenished: each time a card is played a new card is drawn from the pile to replace it. Hands are played with each player alternating going first. Traditionally the dealer is the defender in the first hand so the other player goes first. A hand consists of four cards played by each player. A player must play a card on their turn, they cannot skip over or yield their turn. So a hand ends when the defending player plays their fourth card.

At the end of the hand the cards are counted to see who won that hand. Number cards are worth their face value and added together to give a total for the rank-and-file troops. If at least one alak is played then the total is doubled, and if—in addition to the alak—at least one arl has been played then the total is doubled a second time. There is no benefit to playing two alak or two arl, or even playing an arl without an alak. The highest score is achieved by playing two eight cards, an alak and an arl giving a score of 64.

The winning team captures the opposing team’s hand, adding it to their capture pile and discarding their own hand. In the event of a tie both hands are discarded.

Once all four hands have been played the capture piles are counted. When counting captures, number cards are worth their face value while face cards are always worth eight points.

This is repeated until eight hands have been played. The goal isn’t to just win (which is fairly easy as there is no opposing strategy), but to win by the greatest margin.

Another game of uncertain origin, this game is favored by sailors and is thus played throughout the Misty Sea. Unlike Yamiro or Getha the hands can vary greatly in length as players try to go out.

When an arl is played, any other played card of that suit goes to the player’s hand. This includes the top card on the discard pile, with the arl collecting from the discard until a different suit is encountered.

A player with an arl played can collect from the discard pile out of turn — for example when another player discards a card of that suit. However, this claim can only be done while the card is on the top of the pile. Once another card has been discarded on top of it the card can no longer be collected (unless it once again becomes the top card, either because of other players drawing from the discard pile or collecting cards from it).

An arlas can be played against another player to remove all cards of that suit that have been played — unless the other player has played a deiskatun in that suit or has one in his hand in which case it can be played out of turn to prevent the loss of his cards. Removed cards are returned to the bottom of the deck, including the arlas that was played.

Play ends when a player has no cards remaining in their hand. Each player then tallies their played number and alak cards (including any cards another player played on them). The player with the highest score wins the hand. Running tallies of all players’ score in all hands are kept with the highest tally winning the game.

After each hand the players’ cards are removed from play. When the deck runs out the discard pile (excepting the top card) and cards that have been removed from play are reshuffled so as to allow play to continue.

This is a bare-bones solitaire game that is simple to play and allegedly devised by the philosopher Mari-o-Mari for children to while away the time — though in practice it is more of an adult game. Although on the surface it is not particular to Railog playing cards without the eight suits it would not be the game that it is. It works by having four cards to choose from with the goal being to play them in as few piles as possible. A card is played onto another card of the same suit or rank, or is used to start a new pile. After a card is played a new card is drawn so that (until no more cards are left to be drawn) there are always four cards to choose from. Play ends when the last card is played. The game is scored by the number of piles that have been played. A game with more than seven piles always loses. A game with only six piles is fairly easy to accomplish while a game resulting in only four piles is difficult.

The strategy lies in minimizing the number of piles that are made based on the cards that have been played and the cards available to play. Because cards are played into piles so that the last card played covers the other cards in a pile the player must use their memory as to the cards already played. Selecting a card to play should be done so as to maximize the opportunities that are left to play the remaining cards.